Science at the Shine Dome

A couple of weeks ago I was really honored to be nominated for sponsorship to attend Science at the Shine Dome, as an Early Career Researcher.  Science at the Shine Dome is the annual meeting of the Australian Academy of Sciences (the Australian equivalent of the Royal Academy in the UK).  Hearing fellows of the academy and awardees give fantastic talks about their research was very inspiring and their enthusiasm for science was infectious.

Here is a photo of me (in a very obvious green jumper!) - Firstly with the other 'travel awardees' and then with all the Early Career researchers in front of the Shine Dome.  Photo credit and copyright to Mark Graham photography. 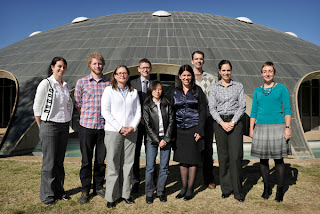 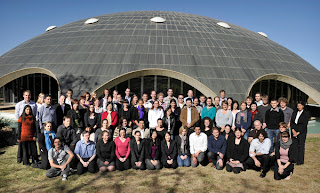 The symposium on Population Challenges to Sustainability was a very interesting one, as there are of course many angles on that complex debate.  The programme for the day was really well thought out and was not all ‘doom’ at all, although there were quite a few sobering statistics.  There was a thought provoking talk on urban design for higher density living as a viable way to cope with increasing populations in Australia and to make our cities more ‘efficient’, although this would obviously imply a lifestyle change for many Australians.    There were also many suggestions on how we might measure impacts and manage population increase in Australia, including Tim Flannery’s suggestion to set up an advisory board to evaluate potential impacts against various criteria to set population ‘limits’.  A number of talks also questioned the emphasis on justifying population increase to increase total GDP, when GDP per capita and other indices may be a better measure of ‘wealth’ – and there appears to be little influence of population increase on GDP per capita.  The question was also raised as to whether economists can’t begin to think about how a contracting economy may be viable rather than always focusing on increasing GDP.    Issues of health and education were also covered, including a talk by Marie Stopes charity which appears to have been successful in some developing countries to reduce population increase through giving women greater access to contraceptives and thus freedom of choice.

CSIRO was well represented at the symposium with talks on population pressure on water resources and agriculture (food security), highlighting the challenges of climate change as well as increasing populations.  I was also pleased to meet Professor Michael Barber at the dinner, who is a fellow of the academy and former CSIRO executive.

Here I am (on the right) dressed up for the wonderful black-tie dinner at the Museum of Australia (photo copyright: Mark Graham Photography). The speaker at the dinner was Professor Robert, Lord May of Oxford, who was very entertaining but also made some profound comments in relation to the theme of sustainability and population increase. 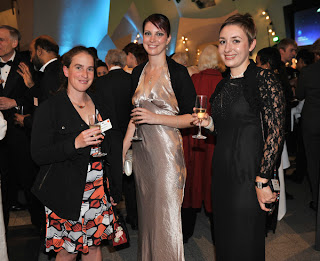 At last, a paper about cane toads!  Well, not quite, but this study on amphibians is an interesting one, as the literature on establishment success is somewhat swamped by plant studies.  Therefore, this study, which uses a meta-analysis of amphibian populations across the globe to examine Darwin's Naturalization hypothesis, is interesting and refreshing.

Establishment success of introduced amphibians increases in the presence of congeneric species.
R Tingley, BL Phillips, R Shine Am Nat 2011 Mar 177 3:382-8 DOI 10.1086/658342
Our Review: Parry H, Lonsdale M: 2011. F1000.com/10431957
When it comes to testing ecological theories of invasion processes, plants have often been the organism of choice. So, to see amphibians being used to test Darwin’s naturalization hypothesis, as in this paper, is exciting.
Read more »
Posted by fnkykntr at 09:50 No comments:

I was really pleased to be told by F1000 that our April review has proved very popular on their site, it was in the top 5% in terms of user accesses for 2 weeks following its publication.  This highlights the importance to the scientific community of the research question 'What are the determinants of success in invasive species?'

Posted by fnkykntr at 10:51 No comments: