A flurry of recent publications indicate to me that the idea of assisted colonization is a hot topic.  Another contribution in this area is from a CSIRO collaboration with UQ and Melbourne Uni, in the new journal 'Nature Climate Change':

This new journal is likely to be highly influential and perhaps also this paper.  It provides a decision framework to enable relocation of species in a timely and proactive fashion under the threat of climate change (or perhaps more likely, human population pressure).  The approach is largely based on theoretical carrying capacities for the source and new region and projections on how they will change over time, with relocation aiming to optimise population size.  The authors try to incorporate uncertainty into their decisions, making the observation that ' There are two key components of climate change that are particularly challenging: management in the face of system changes; and management in the face of uncertainty surrounding these changes.'  It is a very 'theoretical' paper - I would like to see the approach they advocate applied to a practical example.  Maybe that will be a follow-up publication! 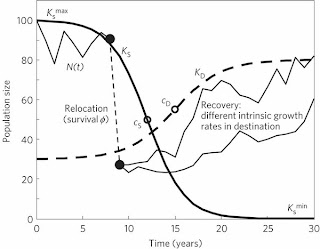 Figure 1: Carrying capacities in the source (KS) and destination (KD) are shown with thick solid and dashed lines respectively; the population size, N, is shown with a thin solid line. The population size represents the state of the system by which decisions are specified. Note, N can decline with KS or increase towards KS, depending on the starting population size. The premise of managed relocation is that the suitability of the source habitat will decline with climate change and a destination habitat will become suitable. cS and cD represent the times at which half the suitable habitat in the source and destination populations are expected to be lost. The demographic cost of moving a population is expressed as the relocation survival rate, ϕ. The thin dashed line represents population change after relocation based on ϕ.
Posted by fnkykntr at 15:32 No comments:

Our latest review for F1000!  It is perhaps my last, as I am soon to take up a post at CSIRO in Brisbane, so I won't be able to work closely with Mark Lonsdale on this anymore, but we shall see.  It has been very interesting searching the literature each month for worthy papers to review for F1000.  Now I am in the habitat I will certainly continue writing this blog!


Assisted colonization: integrating conservation strategies in the face of climate change.
Loss SR, Terwilliger LA, Peterson AC 2011 Biol Conservation 144: 92-100
DOI 10.1016/j.biocon.2010.11.016
Reviewed at Parry H, Lonsdale M: 2011. F1000.com/10103966
As global change accelerates and with it species extinctions, it seems that new measures may be needed in conservation practice. One such measure -- a controversial one -- is that of ‘assisted colonization’. Loss et al. review the potential means to implement such an approach. They feel that there may be some scope for careful use of assisted colonization in conjunction with other landscape-scale conservation measures.

Climate change - so what?

An interesting collection of papers has recently been published in Proceedings of the Royal Society A (London) answering the questions of will the world get over 4 degrees C warmer and so what if it does...

It is based around papers given at a conference in 2009 that asked '(i) how probable a warming of four degrees or higher might be, (ii) what the consequences of such a warming might be for ecosystems and society, (iii) how to adapt to such large changes, and (iv) how to keep the risk of high-end climate change as low as possible.'

Here are some views from a group of Aussie climate scientists!