CSIRO TV has just launched:
This first episode showcases some of the great work by my fellow CSIRO scientists.  It includes an explanation of the role of CSIRO's deep space complex at Tidbinbilla in the recent Mars landing; a new invention of a safer cattle gate; details of one of the many important reports that CSIRO have produced on climate change, this one on the effects on the marine environment; and a showcase of some of the remote technology CSIRO has developed.  CSIRO has also developed remote technology for biosecurity through the virtual taxonomy laboratory at the Australian National Insect Collection.  This uses remote microscopes to link species identification requirements in remote locations with experts here in Australia.

Stay tuned for more monthly video highlights of news and events from across the organization!
Posted by fnkykntr at 09:51 No comments:

With the rise of open-access, rapidly publishing online journals academics publication strategy is becoming even more important.  These new journals do not necessarily have an impact factor but may well lead to high citations for individual articles given their more easily accessible nature.  The dilemma of where to publish to advance your academic career has never been greater.  This is well summarized in a recent article and subsequent reviews on F1000.

On plummeting manuscript acceptance rates by the main ecological journals and the progress of ecology.

I particularly like the questions raised in the reviews as they are pertinent to my own publication dilemmas, where as an early career researcher I'm aware that I'm likely to be judged not only on the number of papers but also the impact factor or rank of the journal I publish in.
I also appreciate David Norton's comment about the value of books, particularly as I have recently published a couple of book chapters and have the opportunity for more - but they tend to be viewed as somehow less worthy than papers:

"I was concerned recently to hear a colleague say that a book was less important than a traditional published paper in terms of research quality – but a book might reflect the results of many years work and provide a synthesis of a considerable body of research, including much reflection; surely this is of more value to ecology than simply publishing the latest bit of data that reaches publishable size that can squeezed out of an experiment or field trial?"
Posted by fnkykntr at 11:21 No comments:

Its not often we highlight an article as 'exceptional', but we felt this refutation that eloquently counters some of the rather wild articles published recently which essentially tell us to stop making so much fuss about invasive species is an important one.

This paper provides some counter-evidence to the argument that native species are as likely to become problematic invaders as non-indigenous species. The authors examined the literature on plant invasions in the United States and found that a member of the naturalised non-native pool is 40 times more likely than the native species to be perceived as invasive.
It is important to note that, while 'invasive' means different things to different researchers in the literature, these authors are using it to mean spreading from the point of introduction into the natural or semi-natural habitat and having an effect on the resident species in the habitat. The authors used Web of Science literature searches to determine for the United States the proportion of native and non-native plant species that were recorded as invasive and to glean the reasons for invasions by native species. In addition to demonstrating that non-native species have far greater invasion risk than native species, they also found that the typical cause for invasiveness of native species was mainly anthropogenic environmental change, such as altered fire regimes and grazing regimes. In other words, it was unusual for native species to spontaneously invade under natural, unmodified environmental conditions.
All this provides an important counter-argument to the proposal that there is nothing special about non-native species per se, which has arisen in recent literature (e.g. [1]). According to Simberloff et al., non-native species clearly have a greater propensity to cause damage than natives, and we should use this information strategically, rather than ignore this important trait.

Posted by fnkykntr at 10:04 No comments:

This month we chose to review a Nature paper, which presents data that perhaps poses more intriguing questions than it actually answers.

Invasion ecologists have invoked phenology as one explanation of the apparent success of non-indigenous forest species compared to native species. This paper shows that the invasion of forest species with canopies that persist later into autumn is resulting in a seasonal change in primary productivity that may rival climate change in size and extent.


This paper shows a clear difference in autumn leaf fall timing for these two groups of species, where non-native invasives maintain their leaves for longer. In spring there is also more rapid bud/leaf formation by non-native invasives before canopy shading. This paper discusses whether this would constitute a competitive advantage (increased annual tree growth) or, in fact, a disadvantage (lack of nutrient resorption in autumn due to frost damage of leaves and subsequent nutrient loss). It would be interesting to compare the data from this study to the behaviour of these same non-native trees in their native range. They do not necessarily behave the same way – there may have been a selection process, or phenotypic plasticity, at play here. The role of phenotypic plasticity in invasion ecology had been suggested a long time ago {1} and has been the subject of recent literature {2}, with some novel suggestions on how it may operate geographically (e.g. see ref {3}).

The Geography of Yellow dwarf viruses and aphid vectors in Australia

I have to admit, it has been a long time since I have had a first-author paper published - I've had several on the boil for quite a while and I'm hoping this year I can pump out a few.  So, I'm really pleased to hear my paper has just been published: The geographical distribution of Yellow dwarf viruses and their aphid vectors in Australian grasslands and wheat, which I wrote with CSIRO co-authors Sarina Macfadyen and Darren Kriticos for the Springer journal Australasian Plant Pathology.

It is quite a challenge to review one's own work, so probably I should leave that to others.  However, in summary I have taken on quite a lot with this paper, because I felt there was a real need to bring the knowledge about Yellow dwarf viruses and their aphid vectors across the country together in one place - trawling through the literature was quite a task!  Hopefully this will save many people the effort and provide a useful snapshot of the state of knowledge in Australia today.  I also give my thoughts on the potential impacts of Climate change and other future threats.  For example, under climate change transmission efficiency of aphids may alter, and some aphid species may undergo range shifts (e.g. R. maidis may shift south from Queensland).  I have tried to summarize these geographical implications of climate change that will impact on aphid/YDV populations in a map (below), although the text in the paper gives a much fuller description of the implications and really this diagram should be seen in relation to that.  I also discuss the potential for the interaction of YDVs with emerging viruses, such as Wheat streak mosaic virus. 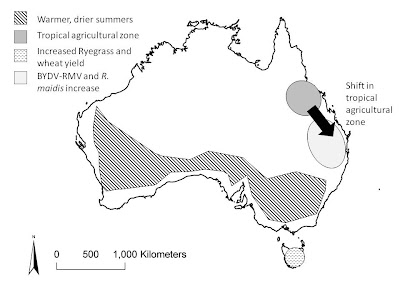 Posted by fnkykntr at 09:47 No comments:

I read with interest this article on the recent call for proposals for the new Australian 'Biodiversity Fund', which is offering $946m over the next six years in much needed conservation and climate change related funding.  However, the first call has attracted much controversy, which is clearly described by well known scientists Emma Burns and David Lindenmayer of the Australian National University.  I myself put in a proposal to this fund, despite advice that the fund was looking for 'practical, on the ground action', my proposal was focused on the 'enabling technologies' component of the call, which is the only place I felt there was scope to propose a spatial planning tool that aims to increase capabilities and success in implementing plantings.  Many plantings are likely to have to provide multiple ecosystem services, such as biodiversity, carbon sequestration, control of invasives and spray buffering, for example.  The question of how best to ensure that plantings provide these services is complex, and requires a strategic landscape scale approach.  Without funding strategic proposals before on the ground action, I totally agree that there is unlikely to be much impact from ad hoc plantings - although, equally, without funding for ongoing monitoring to measure success, it will be hard to judge!
Posted by fnkykntr at 11:31 No comments:

Its always nice to find an example of where a great scientific theory can be tested and prove useful!  In this case, ideas about how timing of watering regimes can give a phenological advantage to invaders but could then also be manipulated to give a disadvantage and so suppress invading populations.  Ideas like this have existed in weed control in agriculture for a long time, but its interesting to see this kind of thinking emerging in a new context.


This is a good example of hypothesis-driven research in invasion ecology. A concept of phenologically driven seasonal ‘priority advantage’ is introduced, which can be used to explain the success of an invasive species. Having shown that the concept is applicable to exotic annual grasses in California, the authors go a step further and show how an understanding of phenology can be a powerful weapon in restoring invaded ecosystems.
Read more »
Posted by fnkykntr at 16:31 No comments:

Our latest review is of a study that reveals something close to science fiction in the interactions between a bark beetle, a fungus and the host plant.  It is a very good paper that presents a well executed study, that includes multiple methods to consider the question:


Do novel genotypes drive the success of an invasive bark beetle-fungus complex?  Implications for potential reinvasion.

This fascinating paper explores the emergence of a mutant, killer fungus as a result of an unholy alliance between the fungus, its beetle vector, and its host plant. It is important for invasion ecologists because it emphasises the role of novel genotypes in invasion success and it does so in the context of a three-way interspecific interaction.
Read more »
Posted by fnkykntr at 10:24 No comments: