Introducing our symposium at ICE 2016!

What do you get if you cross two field ecologists with a spatial simulation modeller...?

our symposium at ICE!

For some time now I have been thinking about the relationships between field ecology and modelling and how one can relate to the other more effectively particularly when it comes to relate movement ecology to population distributions (one thing that got me thinking about that was a 2012 paper by Oliver Restif et al. in Ecology Letters 'Model-Guided Fieldwork'... ).  At the same time, a key aspect of the spatial ecology work we do in the Pest Suppressive Landscapes team at CSIRO is consider how small scale observations and processes relate to larger scale phenomena, particularly of insect behaviour in agricultural landscapes.

And so, Nancy Schellhorn, Cate Paull and myself bring you our International Congress of Entomology (ICE) symposium for 2016:

With only a week to go before we depart Brisbane, Australia for Orlando, Florida, USA we are getting very excited about the conference, our symposium and our fantastic set of speakers!  So I thought I'd give you a run-down of what our symposium is all about here on my blog.


Speakers will consider how landscape-level patterns (e.g. population distributions, migration events) emerge from proximate movement behaviours (e.g. fitness seeking, oviposition behaviour, habitat selection, mating and predation), with application to arthropod pest management in agricultural landscapes. Both theoreticians and empiricists are invited to this session, with the aim to foster cross-disciplinary discussion on how we might better combine models and empirical data to reveal emergent patterns from movement ecology in agro-ecosystems at multiple spatio-temporal scales. We ask researches to draw on case studies from their work where specific emergent properties were identified, how the link was established between individual behaviours and emergent patterns, and at what scale, and to comment on what the results mean for area-wide management of arthropods in agro-ecosystems.


and the program (NB its on Tuesday afternoon) - please click to enlarge: 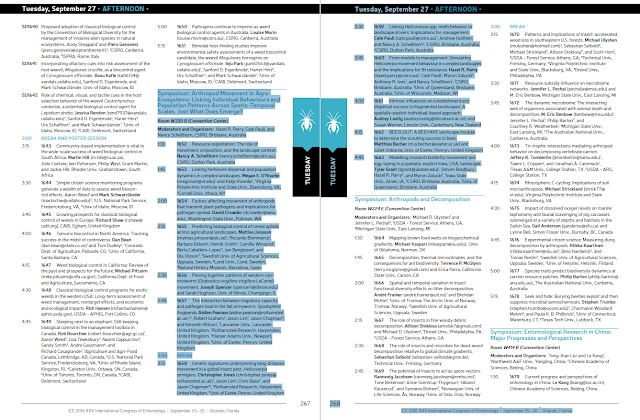 and to get you even more excited (so that we hopefully see you there!) here is the lowdown on each of our fabulous international speakers... (for full abstracts, please see the ICE website here):

First up is symposium co-organizer, CSIRO science leader and ICE Ecology and Population Dynamics Section Convener Nancy Schellhorn from Brisbane, Australia, who will be speaking about resource exploitation: the role of movement, oviposition, and the landscape context.  Nancy will bring together results from multiple studies of different insects in both urban and rural environments to make an interesting observation that the further mobile arthropods have to move to encounter a resource, the more likely they will exploit the resource once found.

Second, we have Assistant Professor of Sustainable Agriculture Megan O'Rourke from Virginia Tech, who is presenting a study she has conducted with Katja Poveda of Cornell Univ.: Linking herbivore dispersal and population dynamics in complex landscapes.  Megan and Katja make the observation that while there are dozens of studies relating land-use patterns to insect populations, there is relatively little clarity about whether landscape diversification could be used to suppress insect pests in agricultural systems.  They aim to gain some clarity by presenting  a conceptual framework for how land-use patterns can affect herbivore populations directly by mediating their ability to disperse in the landscape,supported by examples from the literature and an analysis of landscape-herbivore data.

Next up is Assistant Professor of Entomology David Crowder from Washington State University, talking about factors affecting movement of arthropods that transmit plant pathogens and implications for pathogen spread.  The work of his lab shows that movement of insect vectors at local and landscape scales is influenced by community composition, in turn influencing the dynamics of infectious insect-vectored pathogens. The community ecology of infectious disease has been grossly understudied, and their work suggests a need for more research into how the composition of ecological communities impacts vector movement and resulting pathogen transmission in agro-ecosystems.

Fourth, we introduce Mattias Jonsson a researcher at the Swedish University of Agricultural Sciences in Uppsala.  He presents work conducted with a number of colleagues that seeks to synthesize poorly understood mechanistic linkages between land use, biodiversity and ecosystem service provision in agricultural landscapes.  In particular, he presents a model to map biological control services of aphids across cereal fields in a Swedish agricultural region with varying landscape complexity.

Next is Joseph Spencer of Illinois Natural History Survey, University of Illinois, presenting work conducted with Sarah Hughson.  In their abstract they state that 'we must pay attention to what insects actually do in the field'! When observations and empirical data contradict the conventional wisdom, we should pay attention to the stories that the insects tell... drawing on 20 years studying the rotation-resistant (and now Bt-resistant) western corn rootworm in Illinois, Joseph tells us of the challenges local movement, mating, and dispersal poses for resistance management plans.

Before the break, we introduce PhD student from Rothamsted Research (UK) Aislinn Pearson and her team of supervisors.   Aislinn will be presenting her work investigating the effect that pathogen load has on insect movement behaviours: hosts may be unaffected by infection, they might evade infection by escaping contaminated habitats or infected insects may die during migration. The pathogen too may be affected by the migratory effort of its host, yet few studies have attempted to classify the relationship in this way.  She is getting some interesting results from her flight mill studies of fall armyworm, including that males but not females changing their flight behaviour in response to sublethal viral infection.

After the break is a second talk from Rothamsted Research, by research scientist Christopher Jones and his colleagues from the Insect Migration and Spatial Ecology group.  Chris takes us right down to the molecular level to gain a better understanding of large scale movement: connecting migration of pests to the genes and and biochemical pathways that drive this phenomenon, which are poorly understood.  Chris focuses on the flight propensity of cotton bollworm, where targeted sequencing and SNP analyses have revealed genetic variation in candidate genes that could contribute to key adaptations that drive long-range movement in H. armigera.

Continuing the cotton bollworm theme, the second of the symposium co-organizers, CSIRO researcher Cate Paull from Brisbane, Australia, will tell us about her work with colleagues Andy Hulthen and Nancy Schellhorn on the landscape ecology of this pest in Australia.  Cate has been seeking to understand  key spatio-temporal drivers explaining their abundance across a region and over multiple seasons.  A key result of these studies has been to uncover that significant variation in H. armigera and H. punctigera moths caught in Bt cotton was explained by increasing proportions of Bt cotton at a landscape scale, illuminating male moth behaviour in agricultural landscapes with implications for resistance management.

Then its me, Hazel Parry, research scientist at CSIRO, Brisbane, Australia.  Also continuing the cotton bollworm theme, but this time with simulation modelling.  Obtaining empirical evidence on the efficacy of 'refuges', the cornerstone of the current resistance management system, is difficult: processes operate at multiple spatio-temporal scales, complex interactions exist, Helicoverpa are highly mobile and we must consider both the dynamics of the refuge and the landscape, as well as the pest. Agent-based simulation modelling allows us to explore emergent egg distribution patterns and landscape use by Helicoverpa based on empirical studies of underlying processes, such as movement and oviposition behaviour. I present the results from my modelling, validated against data from the field... and the model has something to say about refuge efficacy in space and time in relation to insect behaviours.

In fact, from my talk onward the rest of the symposium is primarily modelling! Next up is a fellow antipodean from the University of Lincoln (New Zealand) Audrey Lustig, a PhD student supervised by Associate Professor Sue Worner.  Audrey is using modelling to understand mechanisms that control invasive insect invasion, which are poorly understood.  She presents a general modelling framework for efficient evaluation of the relative influence of species life traits, propagule pressure and spatial heterogeneity effects on biological invasion.  This uses landscape measures to establish a quantitative relationship between landscape structure and population dynamics, and the pattern of invasion by multiple species are used to infer key drivers of invasion.

Taking an honourable penultimate 'double spot' in our symposium is researcher Matthias Becher, presenting his work and that of Professor Juliet Osborne (who sadly couldn't join us), both from the Environment & Sustainability Institute at the University of Exeter, UK.  The 'extra' time will allow Matthias to cover both the modelling and field ecology aspects of their work on bees, although as the modeller in the duo I anticipate he will focus primarily on his model, BEESCOUT.  He will discuss how detection probabilities of food patches in the landscape affect colony growth and survival and address the differences between honeybees (large colonies, recruitment to specific sites via waggle dances) and bumblebees (small colonies, no sophisticated recruitment) in terms of their susceptibility to find food sources.

Then, to our final talk.  Last but not least post-doctoral research associate in Natural Resource Ecology and Management at Iowa State University Tyler Grant and colleagues (including myself - his Monarch model originates from my agent-based model of Helicoverpa).  Tyler will present the model of monarch butterfly movement and egg-laying in an Iowa landscape.  Effective conservation efforts in Iowa and the Upper Midwest of the USA will require information on how spatial arrangements of created or restored milkweed habitat influence monarch host plant seeking behavior and egg-laying.  He uses the model to identify characteristics of habitat patches predicted to have higher egg densities, which will inform future conservation efforts.

What an afternoon this is going to be!
Posted by fnkykntr at 22:46 No comments: