The Invasive Species Specialist Group (ISSG) is a global network of scientific and policy experts on invasive species.  They have developed a method of scoring invasive species to come up with a list of the 100 worst.  This was recently reduced to 99, as Rinderpest virus has been eradicated ('from the wild').  That leaves a spot remaining!  So, how to fill it?  Well, this is open for public debate on their website to find the new 100th villain.  Their criteria? Firstly, they developed a shortlist of 50, from:
-  Species with a high number of appearances on current 'hit lists', both international and national
-  Emerging threats: potential major impacts or rapid spread rates of species not currently problematic.

From these, they assigned a score of (i) spread - the number of continents already invaded, and (ii) impact: either ecological, economic and/or health.  Then, they eliminated those whose genus is already represented in the top 100, or those whose value can also be 'positive' (economic, ecological or health).  This leaves just 10 candidates...

I think my vote would probably go to the triffid-like Giant Hogweed Heracleum mantegazzianum, although the aquatic plants on the list also sound particularly threatening. However, it was a surprise to find the beautiful Lionfish Pterois volitans on there - I have often admired this in large aquariums although I was aware it is not one you would easily keep at home, being rather poisonous!  If this piscivorous fish becomes more widespread it's impact on populations of reef fish is anticipated to be enormous - as if there weren't enough threats to coral reefs already with climate change and coral bleaching. Posted by fnkykntr at 13:12 No comments:

My first radio interview!  This is a summary of where we are at so far with our project on 'Pest Suppressive Landscapes'.  Particularly the relationship between insect pests and predators with non-crop vegetation in the landscape, and how this might be managed to better promote predators. 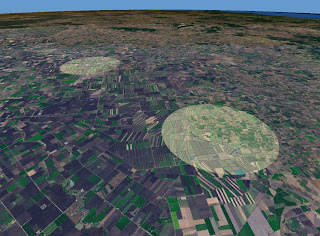 Image shows two of the 7km radius landscapes (circles) that we studied in Queensland.  We have four more landscapes, two in New South Wales and two in Western Australia.
Posted by fnkykntr at 13:17 No comments: