The march of the Cane toads

Despite the name of my blog, its not often I write a post about Cane toads!  But recently a study came out that uses modelling to propose an interesting solution to halt the progress of the Cane Toad across North-western Australia.

Our Review: Lonsdale M and Parry H, 2013.
F1000Prime.com/717979948#eval793471458
Cane toads! Is there any way of stopping their march across northern Australia? This paper uses spatial modeling to suggest an economically and technically feasible solution. The model shows not only the potential importance of man-made waterholes to the invasion process, but suggests a control strategy that targets just these key points in the landscape.


Although this approach doesn't take into account landscape heterogeneity in the dispersal kernel, it does acknowledge that dispersal is not a uniform process, in this case driven by a series of waterbodies as foci of the invasion front. The authors feel their estimates may be conservative due to their treatment of rainfall variability, but it could also be argued that they may underestimate spread from vehicle movement (particularly with the expansion of mining in the region), and the model assumes colonization is very rapid following the presence of two toads at a site. Both of these issues simply highlight the complexity of the simulation of invasion spread. The stochastic approach taken here, that allows for an exploration of the most likely scenarios in relation to a potential management solution, is a good one that could easily be extended both to incorporate more complexity and to simulate other biological invasions. 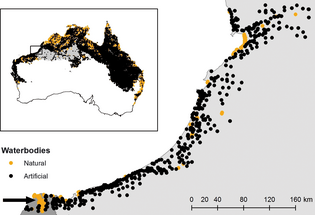 Image from the paper (figure 1): "The study area in Western Australia. The black arrow in the lower left-hand corner shows the location of the De Gray River, which was used as an endpoint in all simulations. The dark grey region below the black arrow shows the extent of the Pilbara region. In the inset, only waterbodies that lie within the predicted distribution of toads (grey shading) are depicted."
Posted by fnkykntr at 11:06